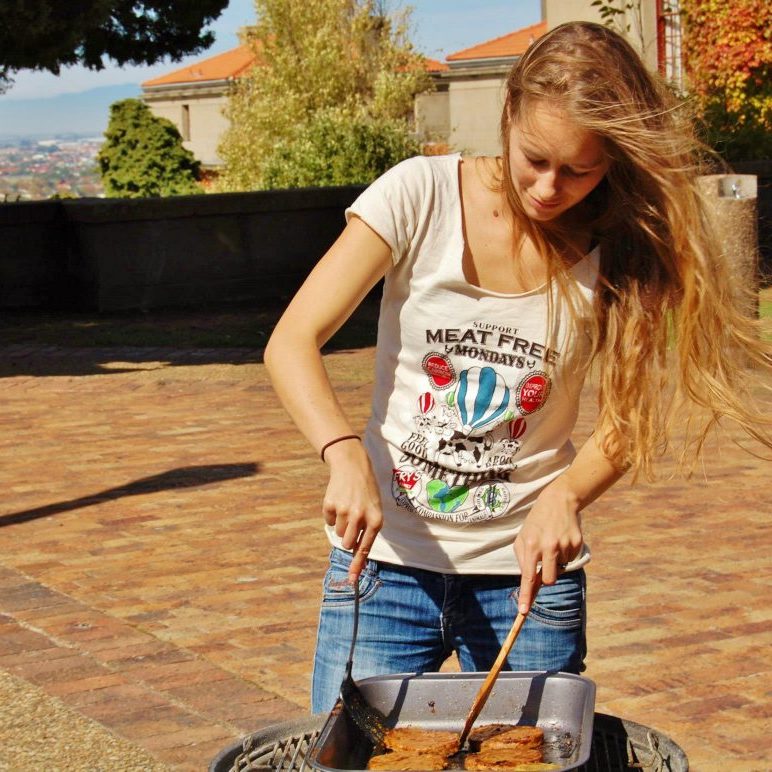 10 years vegan. It doesn’t feel like it’s been that long, somehow… Time flies?

I could share the process I went through that brought me to the decision to try vegan, and I could share what I’ve learnt in the 10 years since then. But that’s a lot of waffle (and most of it’s on my About page anyway). Instead, I’ll share 10 things I learnt (and am still learning) that might come in useful for you, whether you’re on the fence about veganism, or you have someone in the family who’s vegan (to better understand them), or you’re already vegan and a new viewpoint might enrich your experience.

1. A lot of what we ‘know’ about food is nonsense

This is was the first lesson I learnt, and the one that tipped me into trying vegan. The dairy, egg and meat industries are really good at hiding the truth about what they do. That’s not to say that other food sectors are completely honest either, but the financial structures are bigger with meat suppliers than, say, with lentil suppliers. There are stronger incentives to influence nutritional guidelines in their favour, for example, or to lobby against labelling legislation.

I made the transition to a vegan diet by taking a fixed-period challenge. A lot of people do it this way, and for good reason: it takes time to create new habits, and for our taste buds to adjust. I’d suggest trying it for at least three weeks. That said, there’s no reason to go straight from bacon and eggs one day, to vegan the next. I actually took years to make the change: I cut out red meat when I was a teenager, poultry a couple of years later, fish a couple of years after that, and then later I tried vegan. Choose the change you’ll make (e.g. quit red meat, or do vegan-before-6, or vegetarian on weekdays, or vegan), and choose the time period over which you’ll commit to the change. Journal about it. Enjoy it. It helps if the people you live with (and eat with) know about your decision.

3. The initial angst will pass

I had major angst when I made the switch. I was so alone with my feelings: I had realised things that most people near me were unable to empathise with. When I saw meat, I saw suffering. I couldn’t separate the two: I saw my own family as perpetrators of huge injustices. I felt guilt and anger at having been ‘duped’ about the realities of the food I ate, for so many years. Sometimes, I directed that frustration towards people near me who continued to eat animal products. I’m glad to say that that angst has passed, in time. I’ve mellowed substantially, and I’m better able to compartmentalise. I can maintain healthy relationships with the people I care about, despite our different views on food.

… and it’s okay to not have all the answers. I’ve had tons of questions over the years from friends, family and random strangers about the food I eat (or don’t eat). In the beginning, I armed myself with facts: I did my research (which I continue to do, since there’s always more to learn). And then when asked, I shared the facts. But it sometimes happens that I don’t have answers. I really believe that it’s important to be able to say “I don’t know” when we don’t know. Humility is a crucial part of honest scientific enquiry. If I don’t know how to answer someone’s question, I just say as much, and that I’ll do some reading – because that’s an interesting question and I want to learn.

5. Being vegan doesn’t make me better than anyone else

This took me some time to learn. The ‘awakening’ that I felt when I realised what was going on in the livestock industry was so jolting, that I felt a huge chasm open up between me and those around me, who hadn’t seen what I’d seen. And I told them what I’d learnt. And they didn’t change. It was so frustrating. I felt contempt for the person ahead of me in the supermarket line, with their eggs, butter and chicken fillets. I didn’t understand that mine was a very personal context: my psychological makeup, my access to information, how sensitive I am to certain things, my love of cooking… All these things contributed to my process – and I have no right to judge others for not making the same decision that I did. Plus, I was blind to other issues that affect people and the planet in a very real way (e.g racial injustices and white supremacy). Other people are doing very important work to dismantle these oppressive structures, and my activism is not more important than their activism.

The landscape of vegan food has changed a lot in recent years. In the ’70s, it was pretty much just whole, plant-foods. If you wanted vegan cheese, you’d have to make it yourself. Nowadays, things are a little different: the Beyond Burger is rocking our worlds, but it’s not exactly a healthy option – yes, it’s cholesterol-free, but it’s got a very similar macro-nutritional profile as a beef burger (i.e. high-fat, almost no fibre). And there are loads of convenience foods out there that are highly processed, stripped of all the healthful stuff, and loaded with empty calories. Vegan food does not a healthy body make. Be sure to check in on how much protein you’re getting in; watch your saturated fat and omega-6 intake, and focus on whole foods.

On that note… I know. That’s the question that you can put at the number one spot on any vegan website’s FAQ section. Yes, plants have protein. But the thing is, it’s unfortunately quite common for vegans to not get enough protein in. If you’re just eating a lot of veggies with some grains on the side, and if you’re not deliberately incorporating beans, lentils and other protein-rich foods into your daily diet – you might not be hitting the recommended protein intake for adults. It’s something I’ve been guilty of for sure, and I recommend for anyone to make pulses a priority in their kitchen. Check out the Daily Dozen Challenge, and try to get three servings of pulses in daily.

8. Going vegan is not the biggest thing you can do for the planet

This one was a bit harder to swallow, as I had somehow convinced myself that my new diet was the most impactful thing I could do to reduce my environmental impact. In fact, there are two other things that we can do for the planet that are even more impactful than cutting out meat, dairy and eggs. Having one less child (or having no children, or adopting instead), and changing how we travel result in considerably bigger GHG reductions than going vegan. More thorny topics to discuss, then?

There’s definitely a kind of identity switch that happened when I became vegan. Suddenly you’re part of ‘club vegan’ (not actually, but kind of). This can be a great thing for someone who needs a sense of community with their newfound lifestyle choices (especially if their family is struggling to accept the change). But ‘club vegan’ can also be really off-putting for others: maybe they’ve had one too many unpleasant interactions with another vegan, or maybe they’ve encountered some of the problematic views in the vegan community. So – if you don’t want to identify with club vegan, it’s ok, leave off the label. It’s the actions that count.

10. My choices do make a difference

“But it’s already in the supermarket, the animal already died, me buying the meat won’t make a difference….” Someone said this to me recently, and it’s a fairly run-of-the-mill response. Here’s the thing though: supermarkets make weekly (or daily, or monthly) decisions about which products to stock, and in what quantities, based on their sales data. As consumers, we have the power to shape the demand for whatever products we like. It’s thanks to consumers like us that the availability of vegan products has soared in recent years, and it’s thanks to us that farmers and food producers are slowly but surely switching to oat milk instead of cow’s milk and developing vegan meat alternatives to market to their customer base. Don’t underestimate the power of voting with your money.

Ready to make a change?

Would you like to receive posts like these straight to your inbox, plus a recipe? If yes, drop your email down below. You can opt out anytime.
Views: 849