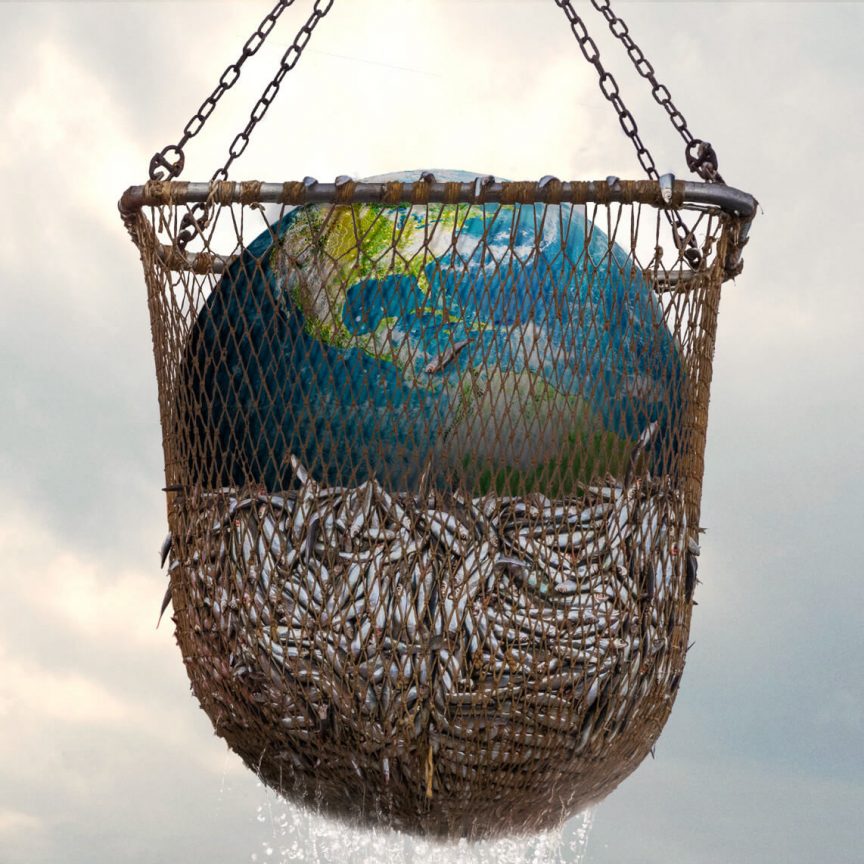 I watched the newly-released Seaspiracy last week, along with many thousands of others. It’s been in the Top 10 in multiple countries in the first few days of its release on Netflix. It’s from the makers of Cowspiracy and What the Health, with a distinctly similar style of exposing an industry and the environmental organisations that are covertly supporting it.

Once you get past the narrator’s somewhat annoying vibe (he reads off the script instead of speaking naturally, and his cold calls to environmental organisations are predictably contrived) – the content is hard-hitting. The ‘seafood’ industry has been duping consumers for a long time. The environmental organisations that promote ‘sustainable seafood’ also appear to be complicit. Spoiler alert: there is no such thing as sustainable fishing (at least, not commercially.)

These issues are not new

A lot of the main points around overfishing, bycatch and fish farming are not new. We’ve known about these issues for years – except that we didn’t have Netflix to disseminate the info on a massive scale. I watched The End of the Line (a documentary based on the book of the same name) when it came out more than 10 years ago and I learnt a bunch. For every kilogram of shrimp that we eat, almost 6 kg of non-target species like turtles, dolphins, sharks and other fish are caught and dumped overboard again – usually injured, dying or dead.

Watching The End of the Line on the big screen, I felt a level of empathy for these animals that I hadn’t before: nowadays, I can’t watch fish being pulled out of the water. This empathy doesn’t come naturally, I guess. They look so different from us, and they don’t scream audibly. It can be hard to imagine that they are sentient or experience pain, but indeed, research confirms that they do.

The incentives are all wrong

The Marine Stewardship Council (MSC), which issues its famous blue-ticked label to seafood products that are deemed to be sustainably fished, is one of the main organisations targeted by the film. I remember interacting with them at an environmental event that I was involved with some years ago. I was quite suspicious: what they stood for and what they were promoting didn’t make sense to me. Now it’s clear: they have a pretty big conflict of interest. Because they sell their certifications to seafood companies, they are incentivised to promote fish consumption. They don’t want people to stop eating fish.

To MSC’s credit, it was through them that I learnt about a study on mislabeled fish. The researchers tested a large sample of frozen fillets from around Cape Town’s restaurants and markets. The results? More than half were not as labelled, i.e. they were labelled as one species, and DNA tests showed they were actually something else. 84% of the fillets labelled as kob were not kob. Around that time, I also learnt how we’re misled about ‘local’ seafood. If you go to a restaurant in Kalk Bay to watch the fishing boats come in and enjoy some calamari, that calamari is very unlikely to be locally caught. It will actually have been shipped in from Thailand, while the local haul gets sold to the Portuguese market. Why? Economics. Thai calamari is cheaper to buy than SA calamari is to sell to a European market.

There are no cameras out at sea

Putting animal ethics aside, transparency is the heart of the issue. That is, if you do choose to eat fish or other aquatic animals. I’ve long believed that consumers have a lot of power to change food systems, by creating or removing the demand for specific products. But that power requires a degree of transparency in the system. If they’re going to make strategic purchasing decisions to influence a system, consumers need to know what they’re buying. The industry knows this, as do NGOs that depend financially on product sales. So, they go out of their way to convince us about the sustainability of their products.

The Dolphin Safe label, also prominently featured in the film, is a great example: how can you really know that the tuna you’re eating didn’t harm any dolphins? As the spokesperson interviewed in the film admits, it’s simply not possible to know for sure. There are no cameras out at sea. In the same way that fishing ships can toss broken fishing nets overboard, they can also throw out any turtles and dolphins they catch, and they can bribe officials to keep their mouths shut. No one will know, so they can claim whatever they like.

Speaking of fishing nets: according to National Geographic, almost 50% of the Great Pacific Garbage Patch is made up of plastic fishing nets that are discarded by fishing boats. (Globally, about 20% of ocean plastic pollution is from “boats and other marine sources”. Unfortunately, the makers of Seaspiracy failed to note this, choosing the more hefty number instead.) While these so-called plastic nets make up a smaller percentage of global ocean pollution than plastic from land sources, they’re still a tragic problem. After they’re tossed overboard, they entangle marine mammals such as seals, who then drown – a phenomenon known as ghost fishing (hence the term “ghost nets”).

If you really want to make a dent in ocean plastic pollution, skipping plastic straws is not enough. You should skip the sushi, too. Organisations like Oceana, Greenpeace and WWF will continue to shout about straws being the problem, probably because they don’t want to damage the fishing industry (if they’re receiving funding from ties to the industry). They’re less likely to highlight the truth if it means they’ll lose out financially.

As George Monbiot puts it:

“These conservation groups seemed not to be restraining the mass destruction of ocean life, but *collaborating* in it. Why? Again, I believe, it’s not malice, but extreme cowardice, self-interest and self-preservation. Result? Don’t trust the labels.”

Take a leap; boycott the industry

No, Seaspiracy isn’t perfect. But it exposes really important realities of the fishing industry that are profoundly and undeniably problematic. Tellingly, the film’s most vocal detractors are those who have financial interests in continuing with business as usual. Oceana, an ocean-protecting NGO that was interviewed for the film, does not encourage its followers to reduce their seafood consumption. Why? “Choosing to abstain from consuming seafood is not a realistic choice for the hundreds of millions of people around the world who depend on coastal fisheries – many of whom are also facing poverty, hunger and malnutrition.” But hey, they seem to have forgotten that the consumers who are responsible for ocean destruction are not those coastal populations that subsist on small-scale fishing…

So what do we do? Watch Seaspiracy, watch The End of the Line, get others to watch them. There’s a lot more in the documentaries that I haven’t mentioned. Educate yourself.

Then, take a leap. Boycott the whole industry. There’s really no reason at all to eat aquatic animals, unless you’re part of a community that subsists on local fisheries. If you’re reading this email, I’m 99% sure that’s not the case.

Besides, if the reason you eat fish is for omega-3 fatty acids, read this post that I wrote a couple months back. Fish get their DHA from algae, so we can skip the middle-fish and go straight to the source ourselves, or we can get ALA from ground flaxseed. It can be that simple, if you’re willing to be the change.

Would you like to receive posts like these straight to your inbox, plus a recipe? If yes, drop your email down below. You can opt out anytime.
Views: 1,767