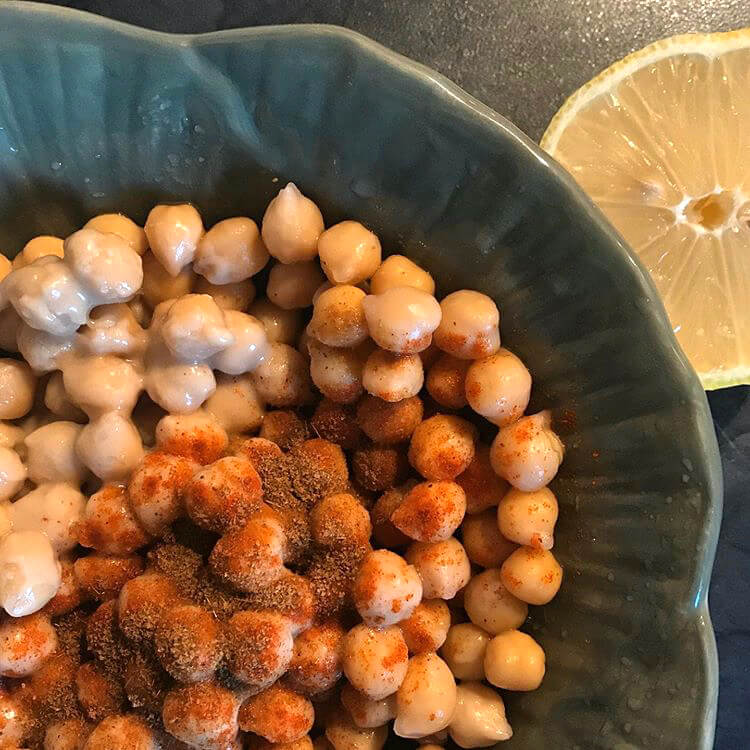 I’ve lost count of the number of times I’ve mentioned nooch or miso only to be met with blank stares. While they’re by no means staples, and I can definitely live without them, here are some magical foodie discoveries that make plant-based cooking so much more interesting and flavourful (I’ll assume that you already have the staples: whole grains, vegetables, legumes, fruit, nuts/seeds):

Nutritional yeast
Aka nooch. Of course, the first thing on my list. Use it as popcorn seasoning, a parmesan alternative, or as an essential ingredient for vegan cheese sauce. It has a nutty, cheesy, salty flavour, and it’s high in protein, fibre and B-vitamins. You can find it at pretty much any health store.

Frozen banana
So simple, but so great. When your bananas are perfectly ripe, peel them, break them into chunks and pop them into the freezer (in an airtight container). Frozen banana is a great base for creamy smoothies, and makes a surprisingly soft-serve-like ‘ice cream’ if you have a good blender or food processor. And because it’s so cold when you use it, there’s almost no banana flavour (but tons of fibre, healthy sugars, and zero cholesterol).

Miso
Fermented soybean paste: the star ingredient of miso soup. A great way to add umami and depth of flavour to marinades, soups and dressings. It’s also a probiotic, so it’s good for gut health (although it’s high in sodium). I get mine from a local Asian grocer.

Aquafaba
Next time you open a can of chickpeas, keep the liquid. Just a few years ago, some marvellous person figured out that it can be used as an egg-substitute. And no jokes, it’s the best egg-substitute out there!  It’ll even transform into a vegan meringue if you’re skilful. Three tablespoons of the stuff replaces one egg. Keep it in the fridge (for up to a week) or pour it into ice cube trays and freeze (it’ll keep for months).

Soy sauce
(Or tamari for a gluten-free alternative). If you love Asian food, this is a must. It’s also a really good ingredient to have on hand for marinades, or to inject some salty flavour in a soup.

Tofu
Crumble it to make a scramble. Add it into a smoothie as a low-calorie protein source. Marinate and bake/fry it to accompany your veg. Use the ‘silken’ variety in a dessert recipe. The list is long…

Smoked paprika
Also known as Spanish paprika (‘sweet paprika’ is the Hungarian variety). Sprinkle it into your dish towards the end of the cooking, for a wonderful smokey and well-rounded flavour. It’s just beautiful.

Turmeric
An anti-inflammatory wonder-spice, a daily dose of turmeric has been recommended for disease-prevention by health experts: Indian food culture has been onto something for ages! Toss it into stews, soups, roast veg, tofu scramble, or make a golden latte for a winter warmer.

Syrups
One of the tricky things to give up for many on a vegan diet is honey (apparently, a single worker bee produces just one-twelfth of a teaspoon of honey in their 5-month lifespan!). There are many syrupy alternatives that do the job just as well. I recently discovered ‘apple honey’ that’s available locally from Herbivore, but golden syrup, maple syrup, date syrup or agave syrup are also good options, depending on your sugar preferences.

Tahini
A paste made from sesame seeds (and nothing else!), it’s an essential component of a good hummus (IMO). It’s also a great addition to dressings and marinades, and is an interesting alternative to nut butter in smoothies or baked goods.

Black salt
Or kala namak. A pinkish-grey salt from the sulphurous rocks of the Himalayan region. I don’t often use it, but when I’m out to make a very eggy tofu scramble, this is a must-have ingredient that’ll fool the most ardent egg lovers. You should find it at health stores or spice shops.

Cashews
They’re pricey, so when I’m on a budget I definitely limit my use of cashews. Soaked overnight and blended with fresh water, they’re the queen of vegan cream. Use them to make vegan cheese, sour cream, ice cream… the list goes on. Budget tip: buy broken cashews (raw, unsalted) from a wholesale outlet, and store them in the freezer.

Liquid smoke
Ahhh that smokey flavour. Half the reason that bacon-lovers struggle to shake the craving (right?). Liquid smoke used to be hard to find (and typically only available from butcheries), but nowadays you can find it more easily: I found a bottle at Woolworths the other day. Use just a few drops at a time.

Alright so there’s my list! Did I miss anything? It’s a long list, I know! Maybe choose one ingredient at a time, and experiment with it. Google is your friend! Enjoy the kitchen adventures, it’s a fun journey 🙂

Would you like to receive posts like these straight to your inbox, plus a recipe? If yes, drop your email down below. You can opt out anytime.
Views: 1,020