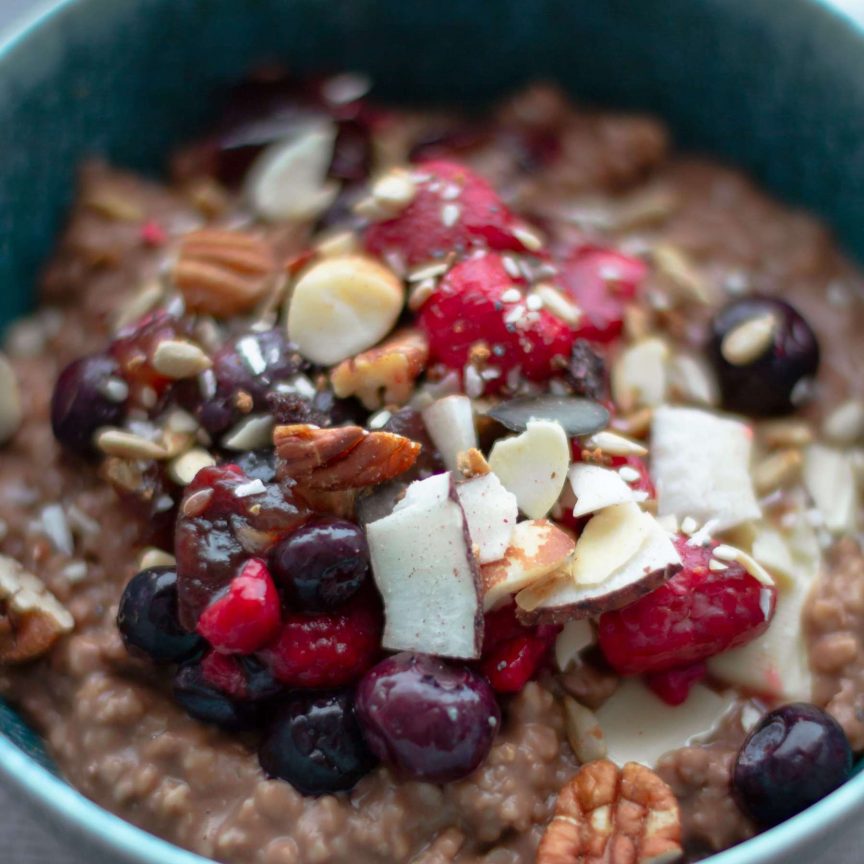 Friends, I’ve changed my mind about breakfast. For the last couple of years, I’ve been calling myself “not a breakfast person” – simply because I’m not hungry until 12 pm or so. I have my coffee (sometimes black, sometimes with soy milk), and my stomach doesn’t talk to me until later. But like I said, I’ve changed my mind, and I’m making a point to eat breakfast before 11 am.

What happened? I’m reading How Not to Diet. It’s not exactly light reading. It’s chockablock with information, with every statement is cited. (The almost-5,000 references are listed online, since they would have added a good few more pages to the already 570-page book.) The book is fascinating, and I’m learning a ton. Despite the title, I’d recommend it to anybody with an interest in nutrition, not just those who want to lose weight. There’s so much information from fairly recent studies about how our bodies metabolise food, useful knowledge for anyone.

One of the big learnings for me? When you eat matters, a lot.

Breakfast is the most important meal of the day

Sure, breakfast cereal companies have been telling us for decades that breakfast is “the most important meal of the day”. (John Harvey Kellogg also believed that breakfast would dampen Americans’ sexual urges 😂) Lots of people have been justifiably suspicious of this breakfast propaganda. But, studies are showing very, very strong correlations between obesity and breakfast-skipping. But is it a causal relationship? Turns out, yes…

When adults were randomised to either eat breakfast or skip breakfast, the breakfast-eating cohort ended up consuming significantly more calories over the day, but their body fat loss was about the same. How to explain this paradox? Their ‘physical activity thermogenesis’ was higher than the breakfast-skippers – in other words, they were subconsciously moving more. Maybe they were doing more house chores, or just missioning around, or bopping their legs… On the other hand, the breakfast-skippers were more sedentary, expending far fewer calories as the day went on.

We’re deeply wired to be breakfast-eaters

As it happens, there’s even more to explain this phenomenon. Enter: the fascinating topic of chronobiology. Our bodies (and plants, too) are deeply wired to an internal clock of sorts, a biological clock with a circadian rhythm of about 24 hours. It’s almost as though our bodies know to expect us to move more during the day (i.e. that’s when we need energy from food), and to sleep at night. So our breakfast gets mostly stored away as muscle glycogen, to be used up later in the day. But that process of storing energy as glycogen (glycogenesis) itself uses energy, often our body fat. On the other hand, our bodies don’t expect us to be moving much at night, so dinner ends up as blood sugar. Less of it gets stored as glycogen, so we burn less body fat in the evening.

It’s pretty crazy cool to learn about how our bodies have evolved to metabolism food. It’s a little scary, too: our modern lifestyles (and the food environments we live in) are really, deeply unsuited to the bodies we have – but armed with this knowledge, we can make food choices that more closely suit our biological adaptations.

Breakfast is the winner of the big-meal game. I’ve gotta say I’m slightly bummed: I’ve been enjoying my breakfast-free mornings. But now that I’m learning to appreciate breakfast again, I have noticed that I’m markedly less sluggish. I’ll give it more time before saying for sure, but it’s nice to have a little kick of energy in the morning.

Would you like to receive posts like these straight to your inbox, plus a recipe? If yes, drop your email down below. You can opt out anytime.
Views: 1,018