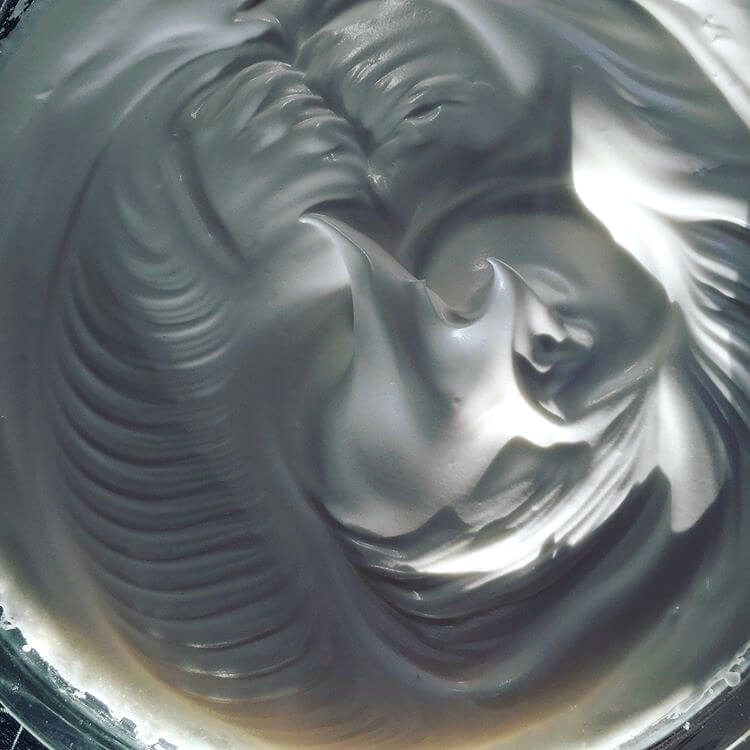 Oh, eggs. The baking ingredient with the most complex and interesting properties: no wonder pastry chefs everywhere rely on them for their beautiful creations. But fear not, vegan culinary geniuses have cracked the secrets*. The trick is to understand why chicken’s eggs play such a big role in baking, and then to find egg substitutes that best mimic the most important functions for that specific recipe.

* Thankfully. Besides eggs being a bit weird (the product of a chicken’s reproductive cycle, hmm), there are numerous animal welfare and ethical concerns with chicken farming, even small-scale ‘organic’ farms.

That said, in general it’s safe enough to use a default egg substitute like a ‘flax egg’ (one tablespoon ground flaxseed with three tablespoons water), or three tablespoons of aquafaba (the liquid from a can of chickpeas), to replace an egg. But it gets a bit more tricky when there are more than two eggs in a recipe, where the complex properties of eggs are probably coming into play. In that case, I usually combine a couple of different types of ‘vegan eggs’ so that there’s more complexity in the mix, that way it’s more likely to do the job.

The multiple functions of eggs in baking

Leavening: The long protein chains in egg whites are normally tangled up in clumps, so as you whip egg whites, the protein chains are untangled and lengthened out, and they rearrange themselves around the bubbles that are introduced in the whipping process—forming a stable foam. The volume of the egg whites multiplies, and when exposed to heat, the trapped air bubbles expand, causing the egg whites (or the batter they’re mixed into) to rise.1https://www.thekitchn.com/the-science-behind-whipping-egg-whites-in-copper-bowls-221943

Structure: As eggs (especially egg whites) are exposed to heat, the proteins cause the mixture to coagulate: they go from liquid form to a more solid or gel-like form. This coagulation binds the other ingredients (flour, sugar etc.) together to form a stable structure that holds even after it’s removed from the heat. Hence, your cake keeps its rise and doesn’t deflate!2https://opentextbc.ca/ingredients/chapter/the-function-of-eggs/

Moisture: Thanks to the fat content in the yolks and the water content in the whites, eggs contribute a good deal of moisture to baked goods (along with other ingredients like milk and oil). The proteins in eggs that coagulate when heated then lock in the moisture, keeping the end product from going stale.3https://www.exploratorium.edu/cooking/eggs/eggscience.html

Emulsifying: Egg yolks contain lecithin: a fatty substance that is both hydrophilic (attracting water molecules) and lipophilic (attracting fat molecules). So when you mix eggs with both water and oil, the lecithin ’emulsifies’ the mixture, preventing the oil and water from separating, and keeping the batter smooth.4https://www.saudereggs.com/blog/what-are-the-functions-of-eggs/

Tenderising: In baked goods using wheat flour, the long protein strands of gluten give elasticity to the dough (that’s why you shouldn’t over-mix a cake batter: the more you mix, the longer the strands get). The fat in an egg yolk acts to shorten the strands of gluten, creating a softer product.5http://www.thefreshloaf.com/node/51732/nine-different-functions-eggs-baking

Colour: The bright yellow of egg yolks are typically used to add colour to baked goods such as lemon meringue pie.

How to choose vegan egg substitutes

With all of the above in mind, let’s look at some of the most common vegan egg substitutes, their properties, and where you might use them:

Aquafaba: The viscous liquid in which chickpeas (or other beans) were cooked, aquafaba is the queen of vegan egg substitutes. Discovered very recently in 20146https://en.wikipedia.org/wiki/Aquafaba#Origins by vegan food enthusiasts, its success as a ‘vegan egg’ has taken over the vegan culinary world. Because of the proteins and carbohydrates in aquafaba (leeched from the cooking chickpeas), it offers a variety of properties that make it a fantastic substitute for eggs in baking and cooking: it’s a good binder, leavener, emulsifier and thickener. You can even make meringues with it. Three tablespoons aquafaba ≡ 1 egg.

Flax eggs: My go-to choice for most recipes, especially muffins, cookies, banana bread and veggie burgers. The outermost layer of the flaxseed hull is made up of polysaccharides (complex sugars), which are really good at binding with water—forming a ‘gel’ that mimics the texture of an egg, and has similar functional properties.7http://www.veganbaking.net/recipes/egg-replacers/flax-seed-egg-replacer It’s important to use ground flaxseeds (you can buy it already ground, or get whole flaxseeds and grind them in a blender). Flaxseeds are also a great source of Omega-3 fatty acids, fibre and protein. One tablespoon ground flaxseed + three tablespoons warm water (wait for it to get goopy) ≡ 1 egg

Chia eggs: Similar to flax eggs, for similar reasons, except that you can use whole chia seeds (no need to grind them first). One tablespoon chia seeds + three tablespoons water (wait for it to get goopy) ≡ 1 egg

Banana: Mash half a ripe banana (about 1/4 cup) per egg that you’re substituting. Thanks to their complex sugars, bananas are great in recipes that use egg as a binder. If you need more leavening action, add 1/4 teaspoon baking powder to the dry ingredients.8https://www.leaf.tv/articles/how-to-use-bananas-instead-of-eggs/ It goes without saying that you’ll end up with a bit of a banana flavour, so keep that in mind!

Store-bought egg replacers: Possibly the easiest and most versatile option is a commercial egg-replacer powder. It’ll last for months on your shelf, and will work well in most (if not all) recipes. Typically, it’ll consist of a combination of starches (such as tapioca starch, corn starch, potato starch, arrowroot, agar agar, carrageenan) which act as a binder, a leavener (such as baking powder), and an emulsifier (such as guar gum or xanthan gum). Weird names, but they’re all made from plants! 1/2 tablespoon egg replacer powder + 2 tablespoons water ≡ 1 egg

Baking powder: Not really an egg replacer per se, I wanted to mention this because it often serves a function that eggs often do: leavening. Baking powder contains both bicarbonate of soda (a base) and cream of tartar (a dry acid): when these come into contact with the moisture in a batter mix, the acid and the base react and produce a gas (carbon dioxide) in the mixture, introducing bubbles. A second reaction takes place when the batter is heated.

Bicarbonate of soda (baking soda or ‘bicarb’) + vinegar: Similarly to baking powder, this is instead introduced as two separate ingredients: the bicarb (a strong base) reacts with the vinegar (an acid) to release carbon dioxide. But be careful: if you add too much bicarb for the amount of vinegar in the recipe, there’ll be leftover bicarb which will leave a soapy taste in your cookies.

Turmeric: The only function of turmeric in this context is to emulate the yellow colour from an egg yolk. Add just a pinch! It has a very bright colour and a strong flavour if you add too much.

I hope this overview comes in useful when you want to veganise grandma’s recipe that uses four eggs! Like I said, stay on the safe side and diversify: use a combo of a couple different egg substitutes for better results. Enjoy the experimenting 🙂

Would you like to receive posts like these straight to your inbox, plus a recipe? If yes, drop your email down below. You can opt out anytime.
Views: 1,718