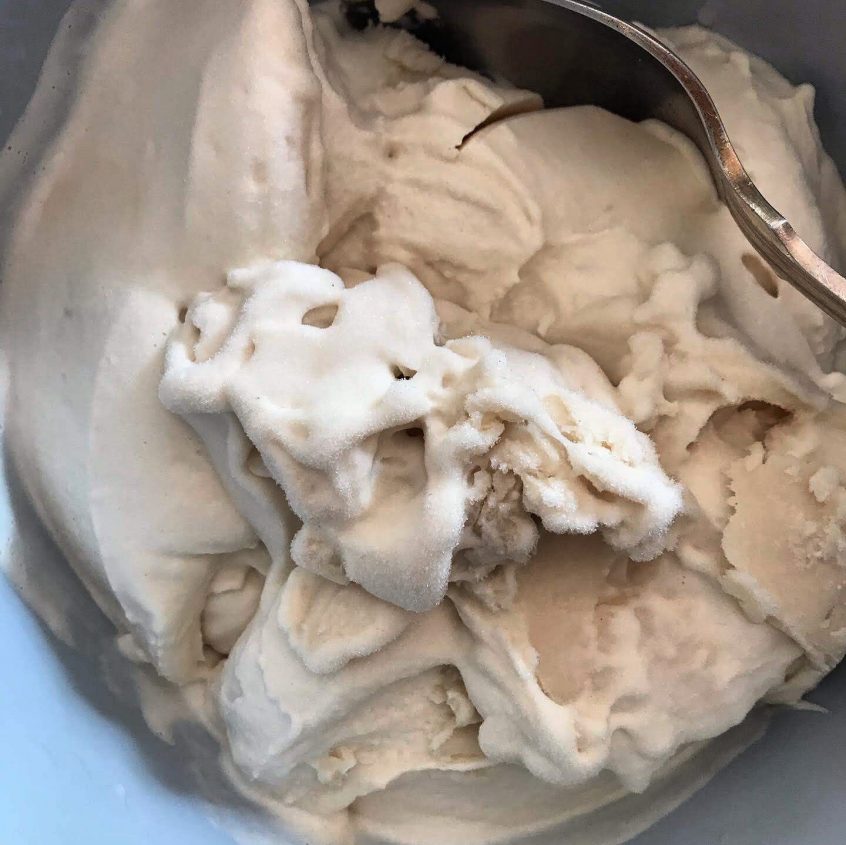 I’ve been making this ice cream for years, ever since I bought my little Krups ice cream maker. The recipe works like a charm, as long as you follow the directions: freeze the bowl properly (the colder the better), make sure the custard thickens nicely, and cool it enough before making the ice cream.

A traditional ice cream is made from a rich custard—with heavy cream, milk and egg yolks. But we’re going to create a version that’s just as creamy, but without the saturated fat and cholesterol of the old-fashioned kind 🙂 The vegan hack to making custard is to use cornstarch. If you read my guide to egg substitutions, you’ll have learnt that one of the functions of eggs is to thicken a mixture. But cornstarch does this too! I also use full-fat coconut cream for richness (since we don’t have the fat from the egg yolks), mixed with soy milk (or another plant milk) so that we don’t have a strong coconut flavour.

So we’ll make a custard, cool it to room temperature, then churn it in an ice cream maker, which introduces air to the mix while it freezes (the key to a smooth and light ice cream experience).

If you’ve tried this recipe successfully and want to get a bit more adventurous, try caramelising the sugar—I learnt this by accident. After you add the sugar to the pan with the coconut and soy milk, don’t mix it at all: just leave it at the bottom of the pan while the mixture heats. The sugar will start to caramelise, and after a few minutes you can mix it through the milk. It’s an awesome variation!

I’ve been making this ice cream for years, ever since I bought my little Krups ice cream maker. The recipe works like a charm, as long as you follow the directions: freeze the bowl properly (the colder the better), make sure the custard thickens nicely, and cool it enough before making the ice cream.
Prep Time15 mins
Bowl-freezing, churning & freezing9 hrs
Course: Dessert
Cuisine: Global
Keyword: birthday, gluten-free