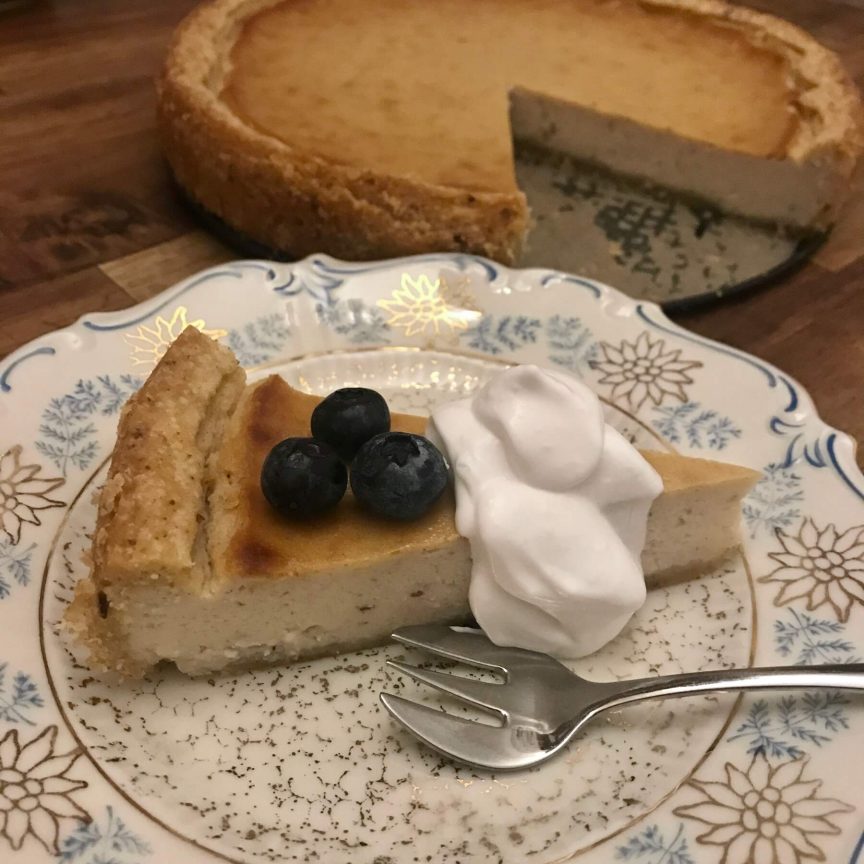 One of the most elusive culinary achievements in my vegan kitchen has been a baked cheesecake. I’d only ever tried a frozen cheesecake, which is super easy to make (using cashews) but very pricey and a different thing entirely. Having spent some time in Germany however, I figured I’d try my hand at veganising a local speciality. Käsekuchen, directly translated, is cheesecake. There are many versions of cheesecakes around the world – even South Africans have their version. The German version has a filling that’s made with quark, a German soft cheese made from sour milk, and a crust made with fresh, buttery dough.

This is a vegan adaptation of a recipe from The Domestic Rebel (which is a translation from a German magazine). Fortunately, vegan quark is an easy find in Berlin, so the main challenge was to replace the six eggs. One for the crust: easy, I used a flax egg (one tablespoon ground flaxseed with three tablespoons of water). Five for the filling, divided into yolks (for richness and binding) and whites (for lightness and leavening). One egg yolk is about a tablespoon in volume, but because there were five, I used a few different replacements to hedge my bets. (The more eggs in a recipe, the more complex their function, so I always diversify). Flax egg + soy flour + coconut oil (for the fat) was my solution. For the egg white replacement, I used aquafaba, of course.

And… it was a delicious success!

UPDATE: Since quark (let alone vegan quark) is not available outside Germany, I tried making this with homemade soy yoghurt instead. I placed the yoghurt in a few layers of cheesecloth (over a strainer) overnight, to remove some of the water. I then followed the same recipe, and it was perfect! 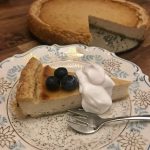 One of the most elusive culinary achievements in my vegan kitchen has been a baked cheesecake. I’d only ever tried a frozen cheesecake, which is super easy to make (using cashews) but very pricey and a different thing entirely.
Prep Time30 mins
Cook Time1 hr 10 mins
Cooling Time3 hrs
Course: Dessert
Cuisine: German
Keyword: baked, birthday
Servings: 12 servings

Would you like to receive my recipes straight to your inbox, along with my latest article? If yes, drop your email down below. You can opt out anytime.
Views: 3,550